A unique project of fusion and mixture of klezmer and the Balkan folk music. On one stage klezmer mainly from the Balkans together with songs from Serbia, Macedonia, Croatia and Bosnia. Preßburger Klezmer Band along with the instrumental masterhood of accordionist Miroslav Vukoić and the exceptional singing by Anita Ribar who give the project the authenticity and the genuine Balkan temperament.

A prestigious selection of their most popular records, produced throughout the 15-year history of the group, are available both in concert and festival versions. The music represents a mixture of ethnic spontaneity, Balkan temperament and modern beat – a spellbinding klezmer of all kinds suitable for both dancing and listening.

Merlin Shepherd is one of the leading clarinetists who specialises in the Jewish instrumental folk music of Eastern Europe commonly known as “Klezmer”. He works as Music Co-ordinator for KlezKamp, KlezFest London and taught at KlezFest St Petersburg, KlezFest Ukraine and KlezKanada. He is one of the world’s leading players of traditional East European Klezmer Clarinet style, and apart from his own ensembles he has worked and toured throughout Britain and Europe with Budowitz, Frank London’s Klezmer Brass Allstars and the Burning Bush.

Event-tested programme prepared in cooperation with a dance trainer who teaches the fundamentals of klezmer, Balkan and other folk dances in a natural and entertaining way. An unforgettable concert that keeps people moving.

Armenian singer, piano player and composer Karine Sarkisjan demonstrates her virtuosic and artistic feelings reflected in the repertoire of the Preßburger Klezmer Band, as well as her own versions and improvisations. The rendering of the singer has been highly appreciated by klezmer legends, for example Lorin Sklamberg and Michael Alpert. Besides Karine Sarkisjan, the band also cooperates with other prestigious musicians who jointly offer exclusive musical entertainment in the programme called Preßburger Klezmer Band & Guests.

A carefully selected collection of older and nostalgic records partly reflecting the holocaust theme in a unique manner and atmosphere.

Soundtracks, theatre music and other types of recordings 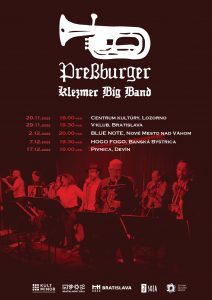